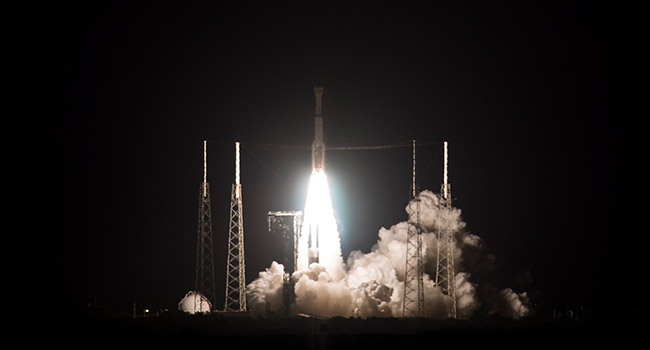 The United States met a mounting 21st century strategic challenge from Russia and China Friday with the creation of a full-fledged US Space Force within the Department of Defense.

Acting on an ambition by President Donald Trump that had met resistance at first, the White House signaled its determination to not cede superiority in a Star Wars-like future of killer satellites and satellite-killer weapons.

Trump made the Space Force‘s creation real with the signing of the 2020 National Defense Authorization Act, which set the initial budget for a Pentagon force that will stand equally with the military’s five other branches.

“Going to be a lot of things happening in space, because space is the world’s newest warfighting domain,” Trump told members of the military gathered for the signing.

The Space Force will be the sixth formal force of the US military, after the Army, Air Force, Navy Marines, and Coast Guard.

“Our reliance on space-based capabilities has grown dramatically, and today outer space has evolved into a war-fighting domain of its own,” said Secretary of Defense Mark Esper.

“Maintaining American dominance in that domain is now the mission of the United States Space Force.”

Esper compared the Space Force‘s creation to the landmark creation of a separate US Air Force in 1947, hived off from the Army after World War II in recognition that aerial war fighting was indeed a separate domain that would be important in the future.

Now that recognition is extended to space, a crucial venue for both military spy and communications satellites which will be targeted by adversaries in any conflict, and the possibility of outer-space launch platforms for destructive weapons.

The Defense Intelligence Agency warned in a report early this year that China and Russia have both developed “robust and capable” space services for intelligence, surveillance and reconnaissance.

“China and Russia, in particular, are developing a variety of means to exploit perceived US reliance on space-based systems and challenge the US position in space,” it said.

China already demonstrated it could shoot down a satellite with a ground-based missile in 2007.

“Both states are developing jamming and cyberspace capabilities, directed energy weapons, on-orbit capabilities, and ground-based antisatellite missiles that can achieve a range of reversible to nonreversible effects,” it said.

Iran and North Korea, too, are increasingly able to extend their military activities into space, jamming the communications of adversaries and developing ballistic missile technologies, it noted.

China and Russia have the perception “that space represents an [American] Achilles heel and that this is an asymmetric advantage for them to then take on the United States’ power,” Steve Kitay, Deputy Assistant Secretary of Defense for Space Policy, said in August.

“Space will not be an Achilles heel” for the US, he said.

The new organization builds on the US Space Command already operating under the Air Force following its creation in August.

Like the Marines, which operate within the umbrella of the Navy, the Space Force will continue to be under the Air Force.

Space Command will continue on, focused on war fighting — much like the Pentagon’s regional commands like CentCom — while the Space Force will encompass broader missions like training, procurement, long-term planning and other functions.

The Space Force will be comprised of about 16,000 air force and civilian personnel, some already taking part in the Space Command, according to Air Force Secretary Barbara Barrett.

It will have its own uniform, shoulder patches and even, eventually, its own song, just as the US Army and Navy have their own.

“The US Space Force will protect America’s national interests by its singular focus on space. The United States has the best space acumen in the world,” Barrett said.

“It’s a different sort of portfolio than what we might be thinking of when we generally think about warfighting machines,” she said.

“With the establishment of the United States Space force, we’re elevating space commensurate with its importance to our national security and the security of our allies and our partners,” said Raymond. 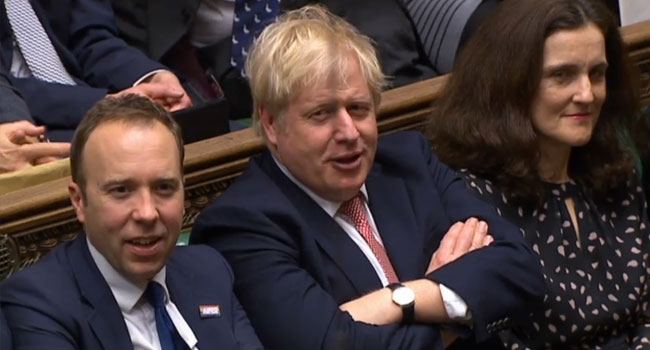 A video grab from footage broadcast by the UK Parliament’s Parliamentary Recording Unit (PRU) shows Britain’s Prime Minister Boris Johnson (C) reacting after his Government won the vote on the third reading of the European Union (Withdrawal Agreement) Bill, in the House of Commons in London on January 9, 2020.  HO / PRU / AFP

Britain’s parliament finally approved Brexit on Thursday, allowing it to become the first country to leave the European Union later this month, ending years of arguments that toppled two governments and splintered society.

The House of Commons erupted in cheers after MPs ratified Prime Minister Boris Johnson’s divorce deal with Brussels by 330 votes to 231, turning the page on an extraordinary era of political drama and chaos.

For much of the time since the 2016 Brexit referendum, lawmakers have been at each others’ throats over how, when or even if Britain should leave its closest trading partners after nearly 50 years.

Some view Brexit with horror, fearing it will strip them of their European identities and turn Britain into an insular, less important nation.

Others embraced it with fervour, viewing it as a chance to “take back control” from officials in Brussels and see Britain regain some of its past might.

Businesses and governments in Europe, puzzled by Britain’s struggles over what they viewed as a self-inflicted wound, hoped that Brexit could still somehow be undone.

A smile and a nod

But Johnson’s comprehensive victory in last month’s general election brought an abrupt end to the turmoil, giving his Conservatives a parliamentary majority with which to push it through.

MPs gave their initial blessing to the EU Withdrawal Agreement Bill before Christmas, and the government set aside just three days this week for detailed scrutiny of the complex text.

But few even bothered to turn up on Tuesday and Wednesday, with both sessions ending early.

The momentous day on which Johnson effectively won permission to abandon the European integration project was all but ignored in Thursday’s media.

Instead, it became a footnote to Prince Harry and his wife Meghan’s decision to quit royal front-line duties — christened “Megxit” and shaping up to be equally complicated and divisive.

“We will be leaving the EU on January 31. We will have delivered on the PM’s commitment to get Brexit done,” a government spokesman said, echoing Johnson’s election mantra.

Britain’s main opposition Labour party, bruised by its worst beating at the polls since 1935, voted against Brexit on Thursday knowing the battle had been lost.

We “may not win many votes in parliament just now, but we can win the moral argument”, said Labour’s Brexit spokesman Keir Starmer, a potential successor to Jeremy Corbyn as party leader.

Johnson attended the session but did not speak, savouring his victory from the front bench, where he smiled and nodded before the historic but all-but ceremonial vote.

The Brexit bill must still be passed by the unelected House of Lords and the European Parliament, which is seen as a formality.

All eyes are now on another major challenge: the negotiation of a new relationship between Britain and the remaining 27 EU nations, which form the world’s largest single market.

The Brexit deal covers separation issues such as EU citizens’ rights and Britain’s financial settlement, and sets out an 11-month transition period in which to agree a wider partnership.

Brussels warns the current deadline of December 31 this year is extremely tight, and has given London the option to ask for more time.

But Johnson insists there will be no extension of the transition period, saying that Britain must be free of EU rules as soon as possible.

Ahead of talks with Johnson on Wednesday, European Commission President Ursula von der Leyen said it would be “basically impossible” to agree everything within London’s timeframe.

“We will have to prioritise,” she said in a speech to the London School of Economics university, warning of “tough talks ahead”.

In response, Johnson’s office indicated that it could accept a partial trade deal.

London does not want the EU’s long-standing policy that “nothing is agreed until everything is agreed” — intended to stop one side cherry-picking bits of a deal they like — to define the coming negotiations, a spokesman said.

“We are very clear we want to get on in terms of negotiating a deal,” he said.